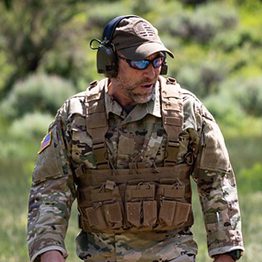 Jeff Tiegs has 25 years of service in US Army Special Operations.

Served in the Special Mission Unit spent over a decade as an operator with USASOC and completed multiple combat rotations to Iraq and Afghanistan.

He has received numerous awards, including five bronze stars for distinguished service and a silver star awarded for valor during combat.

He has commanded units during combat operations around the globe including Panama, Iraq, and Afghanistan.

Now he is taking his experience and applying it to the fight against sex trafficking and the exploitation of women and children in the U.S. As the Chief Operating Officer for Guardian Group, his team leads a nationwide network of veterans who partner with law enforcement agencies to put an end to sex trafficking across the United States.

Jeff was an accomplished ultrarunner and endurance athlete before making the switch to Brazilian Jiu-Jitsu. Recognizing that he has been trained by the best and entrusted with hard-earned martial skills, he is honored to be able to share those skills and experiences at the Elevate Bootcamp on November 7-9 at TRO!